What did you do to your bike today?

Nito said:
. . . had contaminated fuel removed and a new fuel filter/hose etc fitted in tank (and fresh fuel added which will now be over a year and a half old). . .
Click to expand...

Some of my bikes stand for a while (admittedly not 18 months though) and I've never had problems with either fuel injection or carby. Many brands on the market.

nigelrb said:
Some of my bikes stand for a while (admittedly not 18 months though) and I've never had problems with either fuel injection or carby. Many brands on the market.
Click to expand...

Brands? Do you mean batteries? I got a new 190A Fulbat battery with the bike (I'd never heard of them), it's not fitted though as the one in there (also a Fulbat) had come back to life on charger and appears to be working perfectly but perhaps it's lacking that vital extra oomph.

I always put super unleaded in mine as it contains no ethanol down here. I try to run at least a tank of fuel through the lesser used bikes each year to try and keep the fuel no less than a year old, usually filled late in the year so by the bike season it's about 8 months or less old.

I think the fuel is probably the culprit. It cranks fine but takes a long while to actually catch. Once it has started it then restarts first time no problem, even an hour or so later which is a bit odd.

Nah, I meant 'brands' of stabiliser. I was loathe to put up a pic of what I use lest the Honda Haters attack me again!
Since a pic is worth a thousand words, here you are:


I am also a believer of 'premium' ethanol-free fuels.

nigelrb said:
Nah, I meant 'brands' of stabiliser. I was loathe to put up a pic of what I use lest the Honda Haters attack me again!
Since a pic is worth a thousand words, here you are:
View attachment 479336

I am also a believer of 'premium' ethanol-free fuels.
Click to expand...

I have a Honda...(Lawnmower with an MM 93 keyring hehe)

I have a Honda...(Lawnmower with an MM 93 keyring hehe)
Click to expand...

Well, you've made the first rung of the ladder. Can only go up from there!! 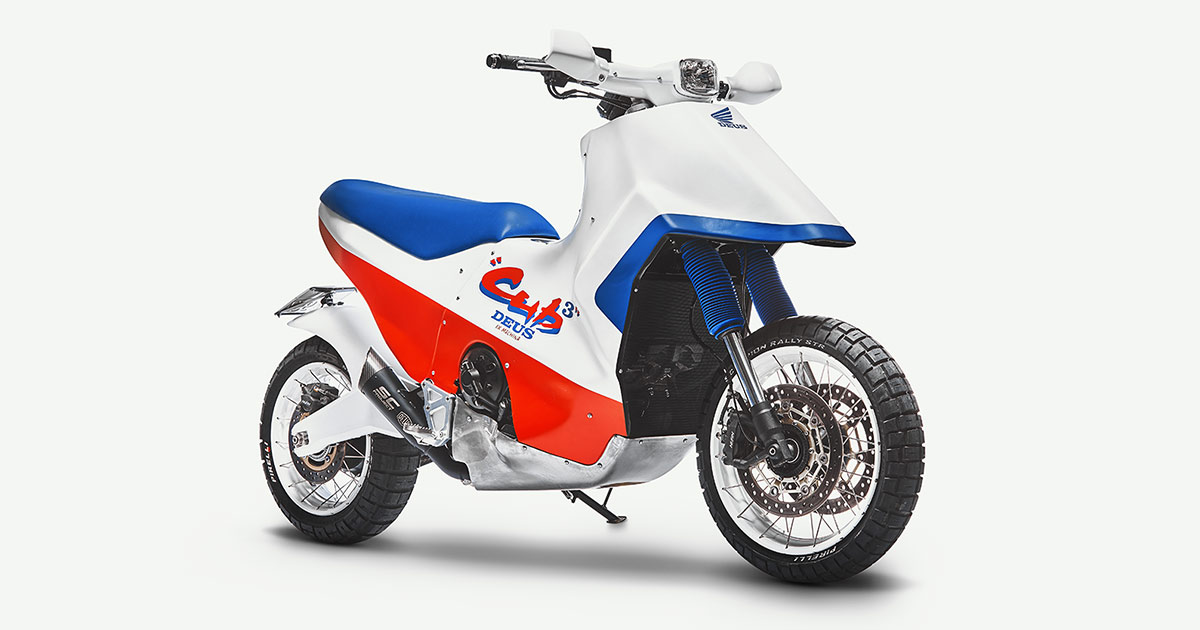 Turning the Honda X-ADV into a Cub EZ 90 homage

Is it too early for a 90s fluoro revival? Judging by this custom X-ADV from Deus Milano, we’d say: bring it on!

Joined Oct 31, 2010
·
1,036 Posts
Nito,
I'm using Startron fuel stabilizer over winter with BP super unleaded. Never had a problem. It must be mixed well and ran fully through the system. Read this: Best Fuel Stabilizers: Top Options for Storage and Protection In this review STA-Bil 22214 is claiming up to 2 yrs storage. Which will suit you and hopefully avoid XBikes having to redo their work.
I have some, just never used it, still on the Startron.

I syphoned the tank out tonight and put fresh SUL in. Then thumbed the starter. It didn’t start first time but about third time and sounded much happier after the first 5 seconds or so. Now the remnants of the old fuel in the lines will have been flushed through I’ll know for sure tomorrow morning if it was the fuel if it fires first time, which I’m hoping it will!!

I checked in the tank with a torch and it all looks clean as a whistle thankfully.

Fresh tank of Super unleaded, roared straight into life on the first push of the starter!

silentservice703 said:
Nigel, are you married?
Click to expand...

Alas, I am a victim of the institution.

I guess it doesn't take much to work out why!!

And it didn't fare too well.

Took about three hours to restore my home to it's pleasing aromas of Avon aftershave, Heinz Baked Beans and discarded condoms.

Joined Sep 14, 2014
·
470 Posts
been out again on my new brutale clutch hand is getting stronger don't want to go to far fitted Oberon clutch slave , fitted STM slipper clutch, bled brakes front and back,
checked rear hub all ok, also changed the fuel filter hadn't been changed in its life .

nigelrb said:
Wet weather in UK. I have the forensic spray booth set up for some non-MV work!
View attachment 479384
Click to expand...

Nice improvisation there lol. I guess you even used the extractor fan 😜

Looks like it has come out well 👍 is that rattle can or airbrush? Looks too little overspray to be a rattle can?

Nito said:
Nice improvisation there lol. I guess you even used the extractor fan 😜

Of course there's no over spray. When I was in kindergarten, I learnt to colour in between the lines. I just perfected the art!

Joined Nov 12, 2016
·
866 Posts
Today, added a few red parts to my bike... And I'm afraid there is something addictive with this, as the first thing I've done after was to browse bolts in order to change the oem fairing bolts in black and red depending where they are on the fairing. Maybe I should not have started in first place
S

Edward said:
Almost finished...
My B4 aluminum radiator shrouds always bothered me. They are factory stamped pieces with poor specs. NOW they are hand finished with adjusted lines, fine-tuned curves, and edge treatment. They actually line up. Who will notice? Me. Maybe you, no certainly you. I have a couple more details to finish. Pics will follow.
Click to expand...