What did you do to your bike today? 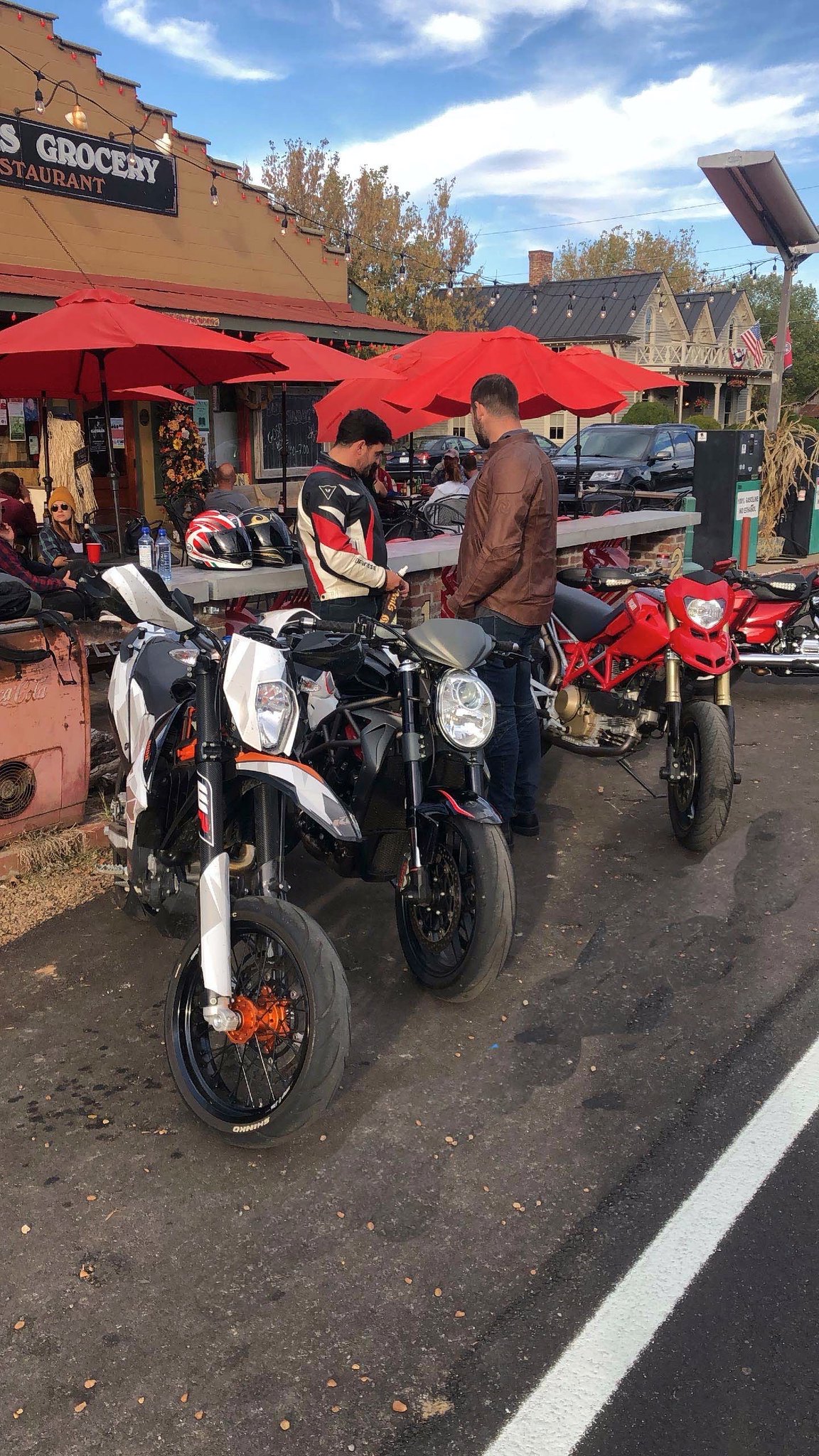 Joined Apr 17, 2018
·
282 Posts
Sunday I cleaned the left fork seal as it was weeping. Looks like I got it to stop leaking by cleaning out some crud. I guess bug guts..?

silentservice703 said:
Ben, that's why we are all addicted....:brutale:
Click to expand...

Joined 2 mo ago
·
25 Posts
This weekend I upgraded the clutch slave cylinder, as many have done before, for better feel and less effort. Lately I’ve been commuting with the MV, but with that comes the (clutch) hand-cramping of rush hour crawls, 5 days a week. Something had to be done.

So I bought the Oberon version from Design Corse, discounted on a holiday sale (USD84.73). They offer 3 brands (Oberon, CNC, MotoCorse), but not knowing what the tactile differences would be, I decided to start with the least expensive and see if I liked its feel.

The installation and bleeding routine were straight forward and uneventful, so I won’t bother with the details. But I will offer one unscripted tip, to have a rubber mallet on hand for coaxing the cylinder out of a slightly corroded bore.

For brake fluid, I just bought a DOT4 with the highest boiling point (509°F)/wet boiling point (338°F) the parts store had in stock: Pentosin DOT4 LV. (I’ve never used or heard of this brand, but learned it’s an established German company that is the OEM provider of lubricants to most German automakers.)

After bleeding the system I had to wait an hour for my hand muscles to return to equilibrium, before having an accurate feeling if the install was an improvement. But I can now definitely tell there is better response to the clutch and with noticeably less effort, which will make a big difference during my slow-speed commutes. Overall, very happy with the outcome.

Next weekend might be water pump upgrade and silicone hoses…if the Clic pliers arrive in time!

I really must learn to constrain myself!:grin2::grin2:

Joined 2 mo ago
·
25 Posts
@silentservice703 yep it's a Craftsman, it's seen most of its use on old british convertibles. not always to fix them, but sometimes just to show them who's boss
► Show Full Signature
2001 MV Agusta F4S

silentservice703 said:
I have that very same mallet in my tool box...and it has about the same amount of "abuse"!

I believe that was a Sears and Roebuck item many moons ago...great tool.
Click to expand...

MVF4S750 said:
@silentservice703 yep it's a Craftsman, it's seen most of its use on old british convertibles. not always to fix them, but sometimes just to show them who's boss
Click to expand...

nigelrb said:
Mine passed its annual roadworthiness inspection today (MoT in UK).
Realised I'd done 380 miles on it last year, bringing it up to 7620 miles.
Click to expand...

@nigelrb in Arizona, we don't have inspections except if a vehicle is being put back on the road after having a 'salvage' title assigned to it. There isn't even emissions testing on motorcycles anymore, there are so many (4+ wheeled) vehicles that the state can't keep up. Also recently, you can now renew your motorcycle registration for up to 4 years, instead of annually...which actually is more convenient for everyone. I'm not sure what the other states are like.


esq'z me said:
I went through several of those "in the day".... Sears would replace the whole hammer for free when the plastic tips broke off. They didn't sell replacement tips. I still have the "core" in my toolbox. Keeping for sentimental reasons I guess.
Click to expand...

@esq'z me I understand. I have too many things I keep to re-purpose or use for "some day I'll need this". I think this year I will make an effort to unload and let go... (2020 is the year of clarity, right?)
► Show Full Signature
2001 MV Agusta F4S

Ooh, I share your stem cells. I am a classic for that.

Shame is that I didn't learn from it. I get the inspiration to have a clean out and 2 hours later have a pile that was to be binned, moved into another storage space (loft/attic) 'just in case'.:frown2::grin2:

Joined Oct 10, 2016
·
610 Posts
Today everything lined up to do some work on my TVL. The weather was warm and sunny and my friend was available to help me out, and all the parts I had ordered were delivered.
1. We installed a Booster Plug. I had installed one on my Brutale and thought it smoothed the engine out at low speeds, so put one in the TVL.

2. The Hi and Low beams on this bike bugged me, when you turned on the hi beams the low went out instead of staying on and filling in the immediate area in front of the bike. Terry told me about a beam headlight adapter. I ordered one, and installed that as well. Works great, now when I put on the Hi beams the low stays on and you can see from right in front and up to about 50-60 feet away.

3. I had issues with my clutch since I bought the bike and the problem got worse over time. It was too snatchy and you could not feather it. It was like and on/off switch. I was not able to start the bike unless it was in neutral. You should be able to start it in gear if you pull the clutch. I would get an error code warning me about the " clutch switch" which would prevent me from being able to use the quickshifter. I had to turn off the engine an it would reset and clear the message, only to return.
I talked to a few people an while no one knew what was the actual problem was, the general consensus was the clutch actuator and or the " SENSORE PRESSIONE COMANDO FRIZIONE" so I ordered both parts and replaced them both as well as bleeding the fluid.
I wasn't able to take it on a long test ride, but the clutch is now acting like a normal clutch, I can go from a standing stop with no issues and the bike will start in gear when I pull in the clutch. I will see if I still get and error code, but it seems like the problems have been solved.
► Show Full Signature
Bikes:

Joined 8 mo ago
·
15 Posts
Installed new QD triple exhaust and disabled the exhaust valve. What a difference it's made!

Allworld said:
1. We installed a Booster Plug. I had installed one on my Brutale and thought it smoothed the engine out at low speeds, so put one in the TVL.
Click to expand...

Was the booster plug application specific to TV? Never mind, I found it on their website.
When I checked with them in 2018. There was no application for our TVs.

However, I'm skeptical of "inline" F.I. solutions after having a bad experience with a dobeck product for my '06 Buell.
So please post your experience.
► Show Full Signature
2016 Turismo Veloce 800

Teeps said:
Was the booster plug application specific to TV? Never mind, I found it on their website.
When I checked with them in 2018. There was no application for our TVs.

However, I'm skeptical of "inline" F.I. solutions after having a bad experience with a dobeck product for my '06 Buell.
So please post your experience.
Click to expand...

I actually talked to the guy he has them for all bikes, the TVL included. I first put one on my Brutale and it worked well, never any issues and made the engine run much smoother in low speeds, like Boston's rush hour traffic. At higher speeds the booster plug is not running the show. I then put one on my Street Triple, which runs pretty smooth at low speeds to begin with but was excellent off the line, again no issues. So now I have one in the TVL, since I didn't take it out for a test ride and I can't say there is much or any difference. The big issue I had was with the clutch and there was nothing smooth about it.
All that this device does is tell the ECU that the air temperature is about 20 degrees cooler, the result is the engine fueling is less lean.
► Show Full Signature
Bikes: